I heard a song the other day that started with the lyrics, “Guess it’s true I’m not good at a one-night stand.” The sadness of those lyrics struck me. The assumption that the majority of people are/should be good at having meaningless physical relationships speaks to just how much society has devalued genuine feelings and emotions like love, affection and caring. It’s become the norm to “use it and lose it.” The fact that the word “it” is used in that term should tip us off to just how much we’ve dehumanized each other.

The song is sung by a man and it got me thinking on the condescending remarks people tend to make that “boys will be boys” and “men can’t help themselves.” I’m guessing many of you agree that the latter is bull and that men can and should control themselves. But what of the first one? There is no denying that little girls and little boys tend to have different interests depending on their gender; but what does that have to do with the crippling idea that men have no self-control?

Quite a while ago I read a blogpost entitled “‘Boys Will Be Boys’ Is No Excuse For Bad Behavior” It’s worth a read, but the idea is that we as parents shoot ourselves in the foot by giving our boys a pass when they act on their aggression, using the excuse of ‘Boys will be boys.’ If it’s ok for little boys to destroy a wooden block castle made by another child, what’s to stop them from destroying bigger things as they grow? What’s to stop them from destroying something that can’t be rebuilt so easily, like the confidence of a school mate, or the body of a girl who tried to tell them no? 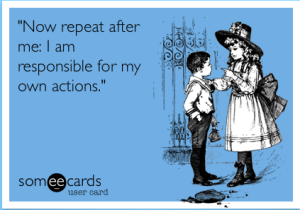 As I pondered on this song lyric, and this blog post, I started to wonder when we decided that men were bound to be destroyers. The day dream of a knight in shining armor is based on the idea that knights were honor bound to protect, to safeguard the fair maiden and defend her virtue. When did it become common practice to abandon that standard? Why is it that a good portion of the population has given up on that ideal? I’m guessing they either 1) assume men just aren’t like that anymore, or 2) think knights from bygone eras only safeguarded women of rank while seducing the milkmaid. Either way I’d like it if we still taught our children (not just the boys, but the girls too) to be protectors, to think of others before they think of themselves.

My wish is that everyone would be uncomfortable with one-night stands. I believe we would respect and honor each other more if we insisted that relationships be taken seriously. I used to watch Gilmore Girls and really appreciated that Rory was an unabashed good-girl. It was disappointing to watch her devolve so quickly into someone who begged a guy to have a no-strings-attached relationship with her because she knew that was how he operated. How sad that she chose to debase herself for the sake of a man.

I’ve read quite a few regencies, and about half of them have a hero who has a mistress. We’re supposed to applaud them because once they fall for the heroine they’re willing to leave the mistress behind. That’s the ‘gentlemanly’ thing to do. We get to ignore the fact that these heroes were happy to use a girl until their true love came along. 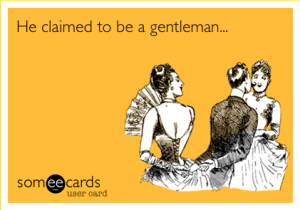 Why do we keep lowering our expectations? We all expect technology to improve in leaps and bounds. We demand the next best thing for our phones and computers. We always want bigger and better quality. We should insist on better quality people as well. We should demand more of ourselves. As a reader and an author, I believe that should extend to characters also. I don’t recall Mr. Darcy or Edward Ferrars having to dismiss a mistress. Mr. Rochester did have a mistress as part of his backstory, and he talks of himself with contempt when relating those facts. He admits that it was lust and vice that drove him to that situation and it’s not something he wants to repeat because it made him hate himself and her.

Let’s stop pretending that it’s ok to use each other, for whatever reason. Let’s raise the standard for what we write, for what we read, for who we love, and for who we are.

10 thoughts on “When Did We Lower the Standard?”