I’ve got a post all written and ready to go called “An Author’s Guide to Self-Publishing.” However, before I publish that one, I wanted to do a precursor to it, because once you’ve finished your book, you can’t just jump straight into publishing.

Or—you could, but you shouldn’t. 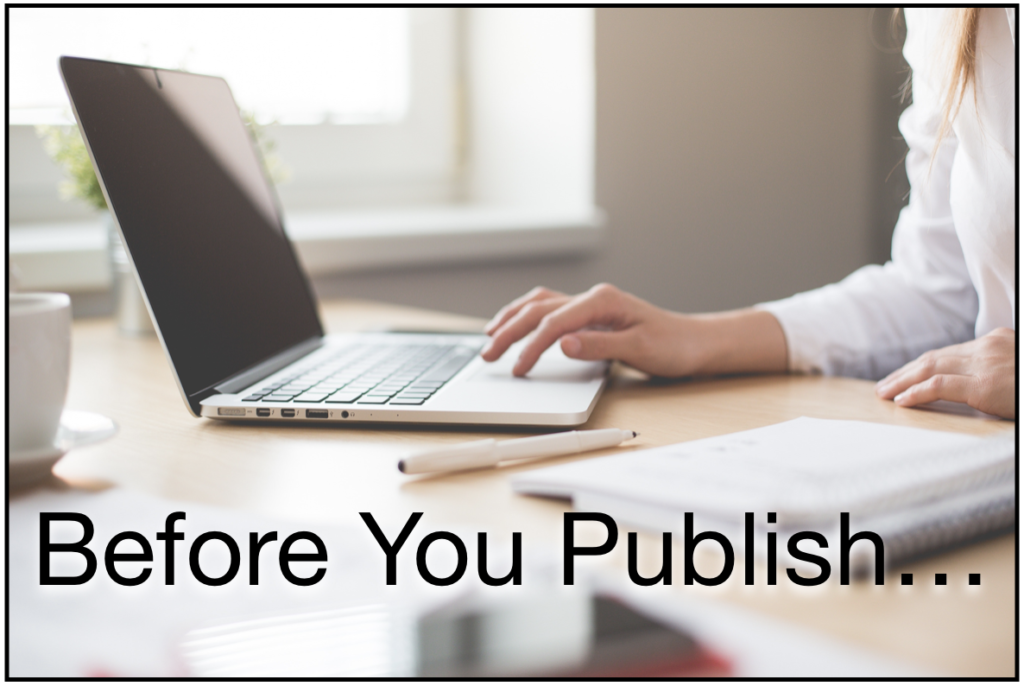 There are somewhere around 8,000 new books published every month on Kindle. That’s a lot of content for people to choose from, so you have to do everything that you can to set yourself apart. The first step, obviously, is to write a good story.

It’s terrifying. You’ve poured your heart and soul into this book. It’s practically like your child. Blood, sweat, tears, and possibly lots of swearing have gone into this manuscript. You want to just put it out into the world and hope that people will love it—or at least that they won’t tell you if they don’t love it.

But that would be a mistake.

Once that book is finished—and often even before it’s finished—you have to put it into other people’s hands and give them permission to rip it apart. You need outside eyes to tell you the things that you can’t see.

Now, in all likelihood, you’re going to hand it to your mom, or your siblings, or a best friend. That’s all well and good, but it’s not enough. People who love you are much more likely to just point out a few typos and then tell you how amazing you are for finishing a book.

And you are amazing.

But I cannot express enough how important it is to give it to someone who’s not afraid to hurt your feelings. Join a critique group. Hopefully it will be comprised of people you’ve never met before but who are serious enough about writing to be able to identify problems. Because when you’re looking at your story, you know what you MEANT to write, so you’re likely not going to notice that you had Sally stand up three paragraphs ago, but you’re having her fidget in her chair right now. Good critique partners are going to say things like:

See what I mean? It doesn’t have to be big stuff. Yes, you want people to point out plot holes, but the way to make your book GREAT is to fix all the tiny little details that other people will notice. Because each one of those questions and comments above represent a time when your reader will be pulled out of your story. And you DO NOT want that. You want the reader to be able to dive in, immersing themselves in your world. But if they keep noticing little mistakes or inconsistencies, it’s going to distract them from the story.

That’s why it’s important to have not only one good critique partner, but MULTIPLE. I have a group of five woman that I meet with every month. We read each other’s work beforehand and then discuss together. It’s great because if someone mentions an issue and the rest agree that it’s a problem, I know that it’s a must-fix. But if one person thinks the kissing is happening too quickly, but then two others say, “no way, it was perfect,” then I can make a judgement call on whether to change it or not.

So, find a critique buddy (hopefully several), keeping in mind that the point is to be CRITICAL.

You’ll notice from the list above that a lot of issues can be resolved really easily. Add a comma. Decide on an expression. Clarify where Joe is in the room. A sentence here, a word there is all it takes to resolve many of the issues that people will have.

Other times, yes, you’ll have to rewrite an entire scene, or even an entire chapter. Suck it up. Kill your darling, and get it done. Your book will be better for it, and anything that makes your book better is worth it.

Depending on your subject matter, you might need a certain type of person to look over your work for authenticity. All Our Broken Pieces includes a character who is a recovering alcoholic. So I reached out to a couple of people who were in recovery and asked them to read my book and tell me what I got wrong. Then I revised, because (unsurprisingly) I had gotten some things wrong.

If I Could Stay deals with law enforcement and criminal procedure. So I reached out to a lawyer and an FBI agent so I could ask questions and correct my mistakes. And because I was able to correct those mistakes, my story was much better.

So there you have it. CRITIQUE, CRITIQUE, CRITIQUE. And when you’ve taken their suggestions and finished revising, you’re going to need an editor. Good editors cost money. That’s okay. Take a deep breath and pay it. Because if you’ve got four typos on page one, chances are half your readers won’t read page two. You can be great at grammar and punctuation and still not be able to see your own mistakes. Your brain wrote the sentence; it knows what it’s supposed to say, so a lot of the time your brain will see the word you intended to write instead of the word that’s actually on the screen.

Ideally, you’ll have someone who can edit for content, then copy edit, then proofread. And trust me, the proofreading is important. I can mess up all kinds of stuff when implementing copy edit changes. It’s much better to catch as many as you can beforehand than to have people reviewing it, saying, “The story was good, but I was distracted by all the typos.”

Do your due diligence. Be professional. Your book will fare much better that way.

P.S. I sent this post to my editor before publishing it. She found nineteen errors. THIS IS WHY I HAVE AN EDITOR.

If YOU are in need of an editor, consider The Writer’s Assistant.

Or, I’m sure there are other freelance editors out there. Google them. Find one that edits your genre. Good luck!

1 thought on “Preparing to Publish”