I had a profound experience just now. I’ll admit, I’ve been having a tough time getting into the Christmas spirit. The whole idea of gifts and Santa has been wearing on me. I just don’t want to deal with it. I don’t want to shop (I hate shopping in the first place) and I’ve been sorely tempted to just tell my kids the truth about Santa. Needless to say, I’ve been trying and not quite succeeding in bringing the true spirit of Christ into the holiday. But then today, just two hours ago, I met Troy.

I was taking my three-year-old to a speech pathologist (he has a developmental stutter and I wanted to know if I should be worried). I arrived at 11:03, thinking my appointment was at 11:00. But my phone dinged, letting me know that it was at 11:30. I ran in to see which was right, my memory or my phone. Of course, my phone was, but they said to just come in now and the pathologist could see me at about 11:15. I ran out to my car and opened to door to retrieve the three-year-old and the baby and was met by an unholy, horrible smell. My baby needed a diaper change, and I mean pronto. Too bad the diaper bag was sitting in my family room at home. There was not a spare diaper in sight. 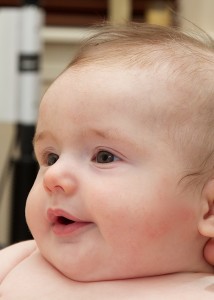 (They look so innocent.)

Since I wasn’t supposed to be there yet, and since I did not want to subject others to the stink coming from my baby’s tush, I sped away and found a gas station across the street. I ran inside with a frantic, “Do you have diapers?” and was met with a negative response. I sprinted back to my car, and was backing out when a man flagged me down. I think he was one of the attendants. I rolled down my window.

“What size do you need?”

“Sure.” I answered, thinking maybe they had found a stray package of diapers on the shelves.

“I live just on the other side of that fence. Why don’t you follow me over and I’ll give you some.”

“Really?” I asked, wondering why this man would take time away from his job to run over to his house so he could give diapers to a stranger.

“Sure! It’s right over there, and the price is right.”

I should mention that there was an Albertsons 1/4 mile down the road, so while I was flustered and in a hurry, this wasn’t the end of the world. But going to a store meant I’d have to haul both boys inside, dealing with carseats and shopping carts and check out lines. I’d be late, and since this was a free screening, I didn’t want to disrespect their time by showing up later than my appointment time, when I had already shown up early.

I followed this gentleman to his mobile home and opened the window to let him know I only needed one. He just said, “Hold that thought,” and ran inside.

He came back with a partially full bag of diapers and a brand new brick of costco wipes (those wipes are my favorite. I think they’re the best). I told him I really truly only needed one diaper, but he said I should just take them. “You looked a little panicked, so I thought I could help out. God bless you.”

“God bless YOU!” I answered, humbled by this man’s kindness. I asked his name and introduced myself.

His name was Troy. “I’ve got a grand baby, or really, my girlfriend’s daughter has a baby.” He gestured to his home and said, “I’ll let you go. I’m sure you’re in a hurry, but this is where I live. If you ever need anything, just knock on the door.” This was said with complete sincerity.

I thanked him profusely, but he just smiled and said, “God works through his people.”

I couldn’t agree more. Thank you, Troy, for reminding me what the Christmas season is all about.

2 thoughts on “Tis the Season”