In anticipation of the Cover Reveal for Missing Lily 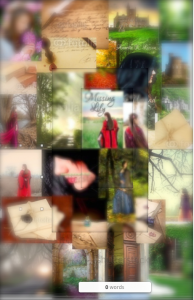 (that will be happening on Wednesday!) I figured I’d fill you in on a little bit of the turmoil and frustration brought about by said cover. This will likely be long and rambling. You have been warned.

I started thinking about what the cover should look like at the very beginning of the year. I scoured stock photo sites for pictures of castles, forest pathways, girls in old-timey dresses, girls in cloaks, horses, letters, doorways, archways, sunbursts.

I thought I knew what I wanted, so I started making mock-ups, many…many…mock-ups. A couple of them were kinda, sorta what I had in mind, but it’s so hard to create the vision in your head with stock photos.

So I scammed a cloak from somebody in my neighborhood, and found a girl who was PERFECT for Lylin (oh, the hair), and I took some pictures of her. And they were ok, but everything was brown and dead still, and it just didn’t look right.

Throughout this whole process, I’d been consulting with my family (mostly my sisters), and one of them offered to take some pictures for me. So she did. She pulled it all together with the girl and the hair and the dress, in just a couple days. The photos were beautiful. Unfortunately, it was still march, and everything was still brown and dead—same problem.

At this point I determined to just wait it out, go down to Salt Lake where another awesome photog sister lives, and do a photo-shoot when I could be on sight. The problem with that is that it was still going to be a couple months before spring, and I’d have to plan a trip down there either with my husband and four kids, or without them. Either way has its own complications. Plus, the book was pretty much done. I didn’t want to wait, I wanted it done now—NOW, darn it!

And so I quietly pulled my hair out and huffed at my computer every time I spent hours trying to come up with a solution and accomplishing n.o.t.h.i.n.g. I complained to my husband about it and he, being the marketing genius he is, told me to send him a synopsis of the story and he would see if he could come up with any ideas. Then, hallelujah! A few days later he did have an idea, and it was brilliant, so I went about trying to put it all together. It would be an in studio photo-shoot, so I wouldn’t have to wait for spring.

I wanted to get it done that next week, because at this point I just wanted it done and over with. But my brother-in-law who has all the in studio photography experience was going out of down on Tuesday, so it would need to be monday. I arranged to go to a costume shop monday morning, but then discovered it was closed, as in, shut down last year. So I scrambled for a new option and rushed down to a vintage clothing store, after managing to get a last minute baby sitter for my kids. I searched the racks and found something that I thought would work out, then called the model on my way home to see if she was still willing to do more photos for me. I picked her up and we did hair, costume, and then gathered props. I loaded the random desk top I’ve had sitting around my house for years (long story) into the back of my car with help from a neighbor. Then off to my husband’s work, where he has a photo studio set up.

And it worked. We got the shot. It was my small miracle that happened thanks to my very cooperative friends and family. I breathed a sigh of relief and grinned for a week afterward, because it was done. The monkey was off my back.

It’s time like these when I find myself, once again, thinking about the pros and cons of being an indie author. If I were working with a publishing house, the cover would be done for me, I wouldn’t have to worry about photos and models and props. It also would likely be done without much input from me, and possibly without my approval. So while the work is sometimes frustrating, at least I can persist until I am happy with the result.

One thought on “Cover Drama”