Scene #2 from Rhys’s POV. This is actually the first one that I chose to write, because it seemed like the perfect moment to delve into his head and get a little insight. I also knew it would be relatively easy for me since I already knew what he was thinking. And now you get to know. 🙂 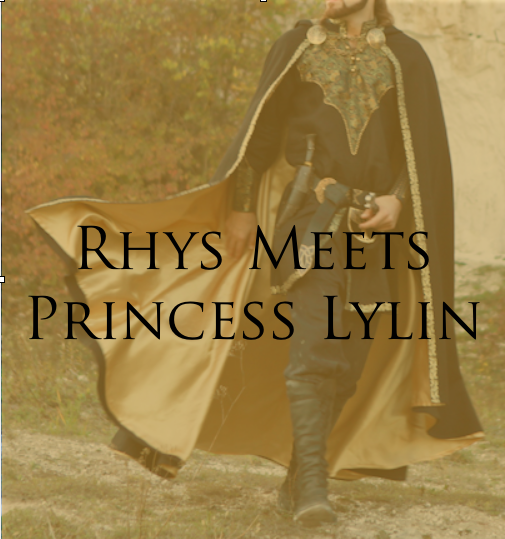 As I passed through the gates of the castle, I steeled myself against the nerves that threatened. I would not shame myself by becoming a bumbling idiot. Bad enough that I was walking into this situation with no idea what my future bride would be like. Well, that was not strictly true. Though I had not been about in society or anywhere near the palace since my parents’ passing, I had a vague recollection of meeting several of the young princesses more than five years ago when I was just a young buck and each put me in mind of a wide-eyed doe. They were all lovely, so I knew Princess Lorraina would be beautiful. Other than that, my recollection was dim at best. Perhaps she would have dark hair and a slight figure. Much like Lily.

No. No, I refused to think of Lily. Forgetting her was the reason I had come. I would keep my word and do my duty, and heaven help me, I would leave Lily’s memory behind me.

I pulled my shoulders back, giving grave nods to each guard I passed and forcing Joe to keep to a sedate walk. He was a magnificent horse—exhilarating to ride—but his refusal to answer to anything but the silly nickname I came up with to make Lily smile was maddening. Out of habit, I patted the pocket that held my letter to her, the one I would probably never be able to deliver. A besotted fool, that’s what I was. Fawning over the vagrant enchantress that had tumbled into my life for a mere four days.

Enough. I shook her from my mind as I pulled Joe to a halt, allowing the waiting groom to take the reins before I swept my coat out of the way and dismounted. I forced purpose into my step, ascending the stone steps that lead to an elaborately carved front door, which was pulled open before I had a chance to slow. An upper servant was there in the entry, seemingly anticipating my arrival. I was late.

He bowed. “Lord Fallon.” He indicated that I should hand my coat and hat to the young boy waiting at his side. I did so, giving the boy a wink before he scurried off. “If you will follow me, the king awaits your arrival.” The upper servant turned and I followed behind, surprised when we bypassed the grand staircase. I had hoped for the opportunity to freshen and change clothes before meeting any of the royal family, but it seemed I was being taken directly to the king. I reached up to comb my fingers through my hair just before he threw open a door and stepped aside.

“Lord Fallon!” the king’s voice rang through the cavernous room as he left the side of a young woman and stepped toward me. His smile was full and sincere as he opened his arms to embrace me. I was hesitant to respond, taken aback to be greeted with such warmth by the ruler of the kingdom. But his embrace reminded me so much of my father that I held on for a moment before pulling back. I had always liked King Forrester, and this was one of the reasons why. It would be an honor and a privilege to be welcomed into his family. It would.

I glanced over his shoulder to where one of his daughters stood, bringing my attention back to the king before her face registered in my mind. My gaze flew back to her and I felt as if the wind had been knocked from my lungs.

She had been looking back over her shoulder at me, her face white, her eyes disbelieving. Now she turned to face me and I scanned her figure from head to toe, reassuring myself of her health and safety. She was well. But why was she here? Was she a friend or—

“Ah yes,” the king interrupted my racing thoughts, gesturing toward the dark haired beauty. “Only she is not Lily.”

What did he mean, she was not Lily? She could be no one but Lily. I would never forget her face. The king grabbed my arm to propel me toward her.

“This lovely girl whom you so graciously looked after is, in fact, my youngest daughter, Lylin.”

My eyes widened and I couldn’t breathe. No. Saints above, no. I turned to the king to assure myself that he was not making some sort of jest, but it was clear he was not. My eyes moved back to Lily, looking for answers, willing her to say something to explain why I was standing here, looking the fool. Her eyes were terrified and confused, obviously just as shocked to see me as I was to see her. Her pixie like face was too pale, making the thin scar above her eyebrow stand out. “Your daughter?” I asked, unable to tear my gaze from her.

“Yes, Lord Fallon,” King Forrester’s broad tones filled the tense silence with a casualty that suggested he expected everyone to be as pleased as he was by the introductions he was making. “I am most indebted to you for the great care you took in looking after my youngest.”

Lily, or Lylin, slipped into a demure curtsey, so well executed, so refined, so royal. I was so distracted by the paradox of seeing Lily this way that I almost forgot to bow in return. I bent at the waist, trying to match the majesty of the castle, this family. The king had thanked me. “It was an honor,” I forced myself to say, pausing to fix her highness with a look that I hoped conveyed my ire at being deceived. “Princess,” I said with a bite in my voice.

“Lord Fallon.” Her perfect mouth formed my name into a whisper. When she had stayed in my home, I had wanted to kiss that mouth. I still did.

“And here is my other daughter.” The king’s words were heavy with implication, forcing me to break eye contact with Lily—Lylin—Princess Lylin.

I turned in the direction he indicated and saw the woman that was to be my bride, the princess that, for the past five years, I had known I would marry. She was not as slight as her sister, nor as short, but she had the same dark hair.

“This,” the king said, “is Lorraina.” I swallowed and forced a friendly smile as the weight of his words hit me. “Lorraina, this is Lord Rhys Fallon.”

I breathed deep, digging to find my manners. “It is a great pleasure to meet you, Princess Lorraina.” I reached for her hand and bowed over it, hoping to show my commitment to the arrangement that had been made. “I look forward to better making your acquaintance.” And I hoped to heaven that I would grow to like her, that I would be able to focus my affection on this sister, and not the other.

“As do I, Lord Fallon.” She smiled, but I could see her distress. Whether it was nervousness, or disappointment, or abject terror, I could not identify. She was not as easy to read as Lily.

The king spoke up. “Lord Fallon, if you would escort the princess into the dining hall, I will join you shortly.”

I bowed my head in acknowledgement and quietly cursed my late arrival. Perhaps if I had had just a moment to collect myself, I would not be ready to pommel the first person who crossed my path. As it was I said the expected, “Of course, Your Majesty,” and offered my arm to Lorraina, my future bride. Her hand was cold, her movements stiff. Did she sense my complete upheaval? Did she realize that I had feelings for her sister? I wondered what Lily had told them of her time in my home. Did they know of the closeness we had shared, of the ache I felt at being separated from her? Had Lily known? Had she realized I was meant for her sister? Is that what had driven her away?

I hoped not. It was bad enough that I had been made to look a fool because I had not recognized a member of the royal family staying in my own home, but if they knew how much more there was—that I thought of her every day, that I had considered trying to break the betrothal—there would be no doubt as to just how much of a fool I really was.