The decision to create a new cover for Just Ella was not one that I made lightly. The original cover design was entirely my brain child. I scoured images, pulled together the background, the dress and the hair and then sent the cobbled together image to my sister, Cherise, so that she could paint it. The resulting painting was gorgeous, fabulous, exactly what I wanted. It was the perfect representation of my book, a cherished piece of art. 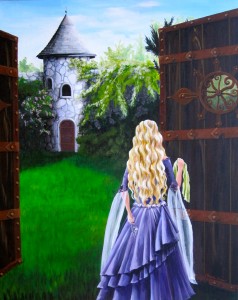 It did not, however, make a good book cover on its own.

I had forgotten about where I would put the title. I hadn’t considered what it would look like in a smaller size. I didn’t know how to make a good book cover, because I’d never done it before (learning curve of a self published author). I hadn’t thought through what it would look like in postage stamp size. And THAT is a very important consideration when your main format will be ebooks. My covers are my one big advertisement. They have to be able to catch a reader’s attention so that they will click on it to read more. If I can’t catch their attention with that tiny cover when they’re scrolling through the kindle bookstore, I get nowhere.

So when my husband and I were trying to take this painting and turn it into a cover, we had to manipulate the colors and change the image so that it read well as an advertisement. I hated that I had to change it. It felt wrong to adjust the colors that my sister has so painstakingly mixed and applied. I didn’t want to change my pretty painting. But it was what it was. Don’t get me wrong, I was happy with the end result. I like my original cover, but it’s always bothered me that it wasn’t true to the painting that my sister had worked so diligently to bring my vision to life.

Over the past couple of years, she’s mentioned to me a time or two that if I want to redo the cover, I should. At first I dismissed the idea. That cover came from my brain and from her artistic hands, and I didn’t want to change it. However, as I pondered on the idea over time, I realized that if I ever got the opportunity, I should probably take it. All of my other covers are photos, and it would look better for continuity sake if Just Ella was a photo cover as well.

There was a catch though. If I was going to shoot anywhere, it had to be in the original location that inspired the cover in the first place. Wadley farms is down in Provo, six hours from where I live. So when I ended up planning a trip to a writing conference in Provo (in May, when the plants and greenery would be gorgeous), I knew I had to give it a try. My oldest sister, Jen (Fauset photography) lives in Heber. So I arranged to go down a day early so that we could get together and shoot.

The date was set. The plan was in motion.

Then I had to figure out the dress. I was determined to find a ready made costume so that I wouldn’t have to spend extra money on buying fabric and extra time trying to make a formal dress utilizing my limited sewing skills.

I went to a costume place, found something that I thought would work, brought it home, looked at it further…it wasn’t going to work. *banging my head against a wall* So I pulled out every formal dress that I had on hand, trying to see if maybe—just maybe—I could utilize something I had on hand. Make it over, make it gorgeous.

I pulled out a bridesmaid dress that I had worn when I was 15 and started tweaking. 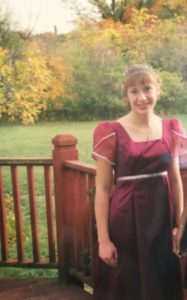 I went to goodwill and bought a cream prom dress that I could use for a contrasting fabric color and I started cutting. And stitching. And adjusting. And so much hand sewing. 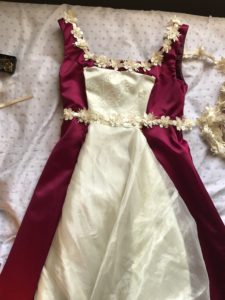 Laying it out, trying to figure out how it’s going to look.

I sew in the same way that I write books. I make it up as I go and cross my fingers that it works out. Then I re-do it when it doesn’t.

Good glory, but I am proud of this dress. 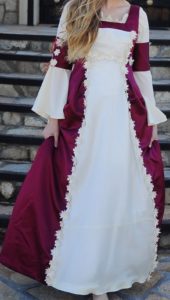 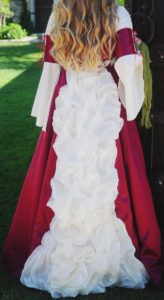 I was working on little last minute tiny details up until the morning that I left to drive down. I became a little obsessive about it. But it was very satisfying to see the final result when the model put it on.

Speaking of the model. Sabrina was amazing! Her hair was perfection and she was so fun to work with. She was happy to do whatever we asked (including climbing a tree) and we had a great time walking around the amazing grounds, going inside the castle (because they have a castle) and contorting ourselves to get the right poses and lighting. (I really wish I had a picture of me propping open the giant castle doors. Two hands on one door, bent over, stretching to keep the other door open with my foot at the same time.)

In the end, it was so much fun, and so worth it. I’ve almost finalized the new cover and will get it up as soon as possible. I’ve been using the other pictures on Instagram, pairing them with quotes from the book, and sighing over their perfectness as I do.