Before I was lucky enough to find blogs and other resources that I could rely on for book recommendations, I would troll Amazon. If a description caught my eye, I would look at the sample pages. In doing so I discovered a disturbing trend in romance novel plots. Two books still stick out in my mind. One started with a drunken man stumbling into what he thinks is his room at an Inn. He then assumes that the girl sleeping in the bed must be a prostitute and he treats her as such. The second book started with a ‘gentleman’ (it was a regency, I believe) coming upon a lady in a garden. He only sees her from behind and mistakes her for someone he was supposed to be meeting for a romantic rendezvous. He ends up assaulting the poor girl before realizing she’s not who he thought she was. When he does realize, there is no apology. He just turns on the charm, brushes it off as no big deal, and they part ways. Later, during the social gathering they are attending, he winks at her from across the room.

I went back and read the descriptions of these books and realized that, yes, in both cases I had just met the hero and heroine of the book. These were the two people that were going to fall in love and live happily ever after.

What the crap??!! Are you kidding me? I’m supposed to root for a relationship that started with the ‘hero’ sexually assaulting the heroine?? Because it was an ‘innocent mistake’ and ‘no harm was done.’ Is that what we want to teach our daughters? Is that what we want to reinforce in our sisters’ and friends’ minds? Setting aside the fact that the first guy was happy to stumble onto a prostitute and take advantage of her, I’m sure he’s still a good guy. He just needs someone to tame him, right? His violent aggression is really just passion, I’m sure. Let’s justify his behavior, make excuses for him and reinforce the idea that his choices don’t have consequences and he should never feel shame for acting on his baser instincts. He’s a man; that’s just the way they are.

Am I supposed to believe that the girls in these narratives weren’t hurt and traumatized by the situation? Am I to assume that they actually enjoyed it and these men just helped them realize that they should free their sexuality and just enjoy, regardless of whether or not they consented to it?

I’ve had reviews of my books that said it was ok, but they couldn’t love the hero because they prefer their men arrogant and dominant. If that’s what you’re looking for, you will have to look somewhere else because I won’t do it. I will continue to write about the kind of men that I will want my daughters to marry. Yes, they will have flaws, but they will have respect, they will know the importance of backing away and keeping their hands to themselves when asked. They will apologize if they ever overstep their bounds, regardless of whether they understand.

I believe in redemption. I believe in second chances. But this corrosive idea that a woman should just give in and let a man show her what she really wants is damning and dangerous.

I recently heard an interesting term. Forced seduction. Apparently this was a common trope in the 80’s and 90’s. It could be found in romance novels and soap operas. The idea is that a man can force himself on a woman (rape her) and that she’ll realize during the act or shortly after that she wants him and they fall in love. It’s Stockholm syndrome and gaslighting at their finest.

I finally jumped on the Downton Abbey train and watched the first three or four episodes. There is a scene where a guy finds his way into a young woman’s room. He tries to seduce her. She says no and threatens to scream if he triers anything. He tells her she can scream, but then everyone will find them together and she will be ruined. He cajoles, threatens, and finagles and she gives in.

Afterward, her mom finds out they were together and asks if he forced himself on her. The young woman says no.

I suppose that’s a reflection of the time period it’s based in, because from where I stand, that was rape. She said no, several times. But he just kept pushing and threatening until she gave in. That’s not consent. That’s acquiescence under duress.

Fortunately, that man is removed from the plot and so it doesn’t turn into some awful, forced “romance,” Because there is nothing—nothing—romantic about that situation.

So let’s all do ourselves a favor. Let’s stop pretending that “forced seduction” has anything to do with love or romance. You know who uses force? Predators.

We can reject those plots. We can and should reject those ideas. Because if we don’t, where does that leave us?

We could all take a lesson from Jane Eyre. When Mr. Rochester tried to assign the blame for his choices to her, she wouldn’t allow it:

“Then you condemn me to live wretched, and to die accursed?” His voice rose.
“I advise you to live sinless; and I wish you to die tranquil.”
“Then you snatch love and innocence from me? You fling me back on lust for a passion—vice for an occupation?”
“Mr. Rochester, I no more assign this fate to you than I grasp at it for myself. We were born to strive and endure—you as well as I: do so.”  -Jane Eyre 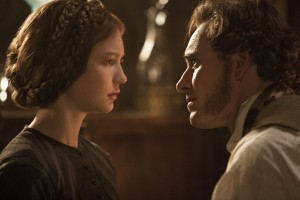 Or there’s this gem:

16 thoughts on “How Romance Novels are contributing to Rape Culture”