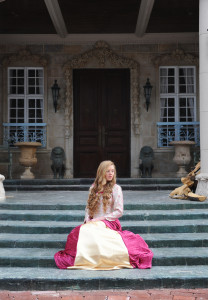 While I was still in the middle of writing Missing Lily, I started contemplating my next project. I decided that I didn’t want to do another princess story. I was done with those. I tried starting the story of Gavin’s younger sister, Kinley, but it never grabbed me. I thought about telling the story of Brinna, Gavin’s jilted fiancée, but I barely got beyond a couple of paragraphs with her.

As you know, my decision to not do another princess story didn’t pan out.

I had always liked Marilee because she was fun and made me smile, but I knew that she wasn’t mature enough for me to want to be inside her head for an entire book. I knew that if I was going to make her a heroine, she’d have to grow up, and she’d have to do it the hard way.

That being said, writing a story about surviving an abusive marriage was not something I would have consciously thought about and said, “Yeah, I can do that.” Instead I was sitting on a plane, heading to VA when I started the first chapter of her story, and it just came out that way. And I couldn’t change it. Her story was right there, ready to be written down and figured out and worked through. And I wanted to tell it, though at the same time, I sat back and thought, “Crap, can I really write this story?” But at that point, it was too compelling to let go. Any attempt at changing it would have felt contrived.

Still, I was very aware of the responsibility that writing such a story would put on me. The author’s note at the beginning was something I felt really needed to be there. I didn’t want anyone to read it and be upset that it didn’t reflect the kind of experience they had had. And I also just wanted to acknowledge the fact that healing from any kind of trauma isn’t an experience that can be put in a box. There aren’t symptoms that are required before you qualify. There is no formula to be followed that will guarantee healing.

The advice that I reflect on more often than any other consists of four words that were said to me by my mother after I miscarried. She said this: Feel what you feel.

In other words, if you’re mad, be mad. If you want to cry, go ahead. If—for just ten minutes—you feel ok, embrace it. There is no right way or wrong way to mourn your loss, so just let yourself feel what you feel and be ok with it.

Each of us is so different in so many ways. We are made up of hours and minutes lived in connection with thousands of other people, each with their own history and personality. Those people influence our thoughts and actions; they can build us up or tear us down. We are made up of parents and teachers, bullies and best friends, illnesses we’ve suffered, books we’ve read, and words spoken to or about us, whether good or bad. The complex mixture of what makes us who we are cannot be duplicated in any other being. Thus our response to any given situation will be uniquely our own.

After I made the decision to go ahead and write Marilee’s story, I took it on in the same way that I take on all of my characters. In any given situation that my character ends up in, I sit there in front of my computer, or with my notebook in hand, and I put myself in their shoes. I imagine what that situation would feel like for them, and I write it down.

It sounds kind of silly when I explain it like that, but that’s the truth of it. My writing is based almost entirely on my ability to empathize.

After I was more than halfway through the book, I was talking with one of my sisters who has a background in psychology, and she mentioned that the way Marilee reacts is very much in line with someone who has PTSD. She was impressed and asked if I had researched it. I felt like a little bit of an idiot for a moment, thinking, “Yeah…that would have been a good idea…” I was taken aback by the conversation because I had never thought of Marilee in those terms. To me she was just a girl who had lived through a terrible situation and was just trying to get her life back.

I considered going back and researching the psychology of it, but ultimately decided against it because my objective wasn’t to write a story about PTSD; it was to write a story about a person. I believe that every person who faces bad situations looks for hope. I believe there is always hope to be found and that redemption is always possible. Most of the time that journey is messy and filled with backtracking and pit stops and flat tires, but we all have the ability to get there.

Hopefully that is reflected in my writing, and when people read Saving Marilee, I hope they will view it as what it is: the story of one girl dealing with one set of circumstances, and trying to find hope along the way.

5 thoughts on “Deciding to Save Marilee”