If I Could Stay

releases in just ONE WEEK! It is now available for pre-order. Click here or on the photo to pre-order now.

is available for purchase NOW. Yes, right this very minute. 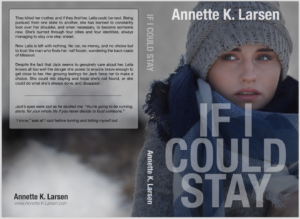 Left. Right. One foot after the other. Keep moving. Ignore the cold. This was a road, and despite it being the middle of the night, that meant that at some point someone would drive by. Please, let someone drive by.

The large tree on the horizon was my focus. I was determined to at least make it to that tree. It was starting to snow, and I knew that the lack of feeling in my feet was a bad thing. My ballet flats were insufficient for this weather. Everything I wore was insufficient. But when Silas had shown up this morning at the salon where I ran the reception desk, I hadn’t bothered going home to gather my things. I’d seen him in the parking lot before he could walk in and spot me. I had felt the blood drain from my face and for a moment I was rooted to the spot, barely able to breathe. Twice in my teenage years, I’d seen the people that Silas had dragged back to my father. They were always bloody, and I never knew if they made it out of my father’s house alive after spilling their secrets.

My mind had clicked into gear. I’d grabbed my purse and asked Janelle to watch the desk while I went to the bathroom. Then I’d speed-walked to the back room and ran to the door that spit me out into the alley behind the salon. The old car that I’d paid cash for was there waiting for me. My go-bag was in the trunk with all the money I’d saved while working at the salon, along with clothes and a few other essentials.

I had pointed my car toward Kansas City and the bus locker that held everything I needed to start over. But less than an hour from my destination, my car slid off the road. Now it sat sideways in a ditch, stuck in the snow. Black ice and my exhausted brain had landed it there. I’d been lucky to get up to the road before my clothes could become completely soaked through with the snow. Unfortunately, the trunk had been crunched enough that I couldn’t get to my go-bag.

This morning, I’d been living in Baton Rouge, Louisiana. Now I was somewhere in the middle of Missouri, on an empty backwoods highway in the dead of night.

I didn’t know what time it was, but it had been dark for hours. My phone was in the dumpster behind the salon, the SIM card snapped in half and tossed along the side of the road a couple miles out of town. It had to be left behind just like everything else. I would need to use another name, like so many times before. Nothing traceable would go with me. I had planned to abandon my car as soon as I had the new ID and cash from the locker. So even if it were found by the police, it wouldn’t do them any good. I’d left behind my license, passport, and all traces of Maggie Lawrence, just like I had with Claire Maguire, Jenny Tolman and Emily Chandler.

This time though, my departure was even more panicked than all the times before. None of my father’s people had ever gotten this close in the past four years. Plus, this was Silas. He was my father’s favorite pit bull—and a police officer. One of New York’s finest—so long as you ignored the bloodlust and corruption.

I looked up to gauge how much progress I had made. The tree didn’t look any closer. Was I even moving? Glancing down at my feet, I realized that each step moved me forward only a couple of inches. Perhaps I’d be better off just sitting down. But the ground looked icy and hard, so I kept shuffling, my small purse bouncing against my leg with every step. It was important to keep moving, right?  Wasn’t that what I had decided?

A hazy light flickered at the edge of my vision and I blinked, afraid I might be on the verge of fainting. The light grew steadily brighter, casting my shadow in front of me, and I realized it must be headlights coming from behind. I turned and stumbled into the road. Maybe that was idiotic of me, but it seemed the best way to ensure that the car would stop.

The headlights were all I could see, and they slowed as they came closer, then stopped. I blinked against the harsh light but could only stand there and wait.

“Miss?” a male voice called. His silhouette hurried toward me. He came right up to me and ducked to look me in the eye. He was tall and probably in his twenties. “You all right, miss?” He gave a little shake of his head, grimacing. “No, you’re not all right; you’re freezing.” He stripped off his coat and wrapped it around my shoulders, then yanked off his stocking cap and pulled it onto my head.

Oh, sweet warmth. I said thank you. Or at least I thought it. The words never made it to my mouth.

“Let’s get you in the car. I’ll take you where you need to go.” He put his arm around me, propelling me forward. I managed only a lurching step or two. “Are you hurt?” He looked me over, but I wasn’t bleeding, so he waited for me to respond.

I shook my head—a jerky, awkward movement. If I was hurt, it wasn’t enough to want to talk about it right now.

“I’m going to pick you up, all right? We have to get you inside the truck.”

Again, the words stuck in my throat, but I managed the slightest of nods.

He lifted me, and my mind wandered to his question. Was I hurt and just didn’t recognize it through the cold and shock? That would be very bad. True injuries required hospitals, and hospitals required names and a paper trail. There could be no paper trail.

My head lolled against his shoulder. He was so warm. Even though he was out of his coat and in this freezing air, I could feel the heat radiating off of him. I snuggled in, trying to get closer to the heat.

He sucked in a breath when my cheek touched the skin of his neck. “Sheesh. You’re freezing.” He fumbled for the door handle and got it open then hoisted me up inside. When he tried to pull away, my hand was fisted in his shirt and I was shaking so hard I didn’t know if I’d be able to let go.

“I need to get in the other side, miss.”

I shook my head, afraid of letting go of his warmth.

“We need to shut the doors. I’ll get in the other side and try to warm you up a bit before we start driving.” He didn’t wait for a response, but pried my hand away and shut my door.

Hopefully that gets you excited. I know I am. Here are those links again.

If I Could Stay ebook preorder

If I Could Stay Paperback

Add to your Goodreads Want to Read shelf